At the age of 19, Henry McCarty (aka Billy the Kid, aka, aka Henry Antrim, aka William H Bonney) came into the Texas Panhandle in the fall of 1878.  Billy and his gang, the Regulators, were running from the law after their involvement in the Lincoln County War.  They had requested amnesty from New Mexico Governor Lew Wallace, but were denied.  Before leaving New Mexico, they rustled horses and cattle (mostly from other thieves) and drove them into Texas to sell.

Billy was met north of Tascosa by LIT Ranch wagon boss C. S. “Bill” McCarty (name must have seemed odd to Billy).  McCarty told Billy they wanted no trouble from him.  Billy agreed and moved his horse herd south of town where Tascosa Creek flowed into the Canadian River.

During his time at Tascosa, the Kid was known as an avid sportsman, racing and betting on his horses, gambling, and holding shooting contests.  Decades after the demise of Tascosa, locals recalled that Billy was involved in a shooting contest with Batt Masterson and Temple Houston, son of Texas hero Sam Houston, a match he was said to have lost to Houston.  He was also known as a hothead.  Individually he called out LX Ranch Superintendent William C Moore, rancher Ellsworth Torrey, and local Tom Middleton,  threatening to kill them for suggesting that he and his gang were anything other than respectable.  They all backed down. 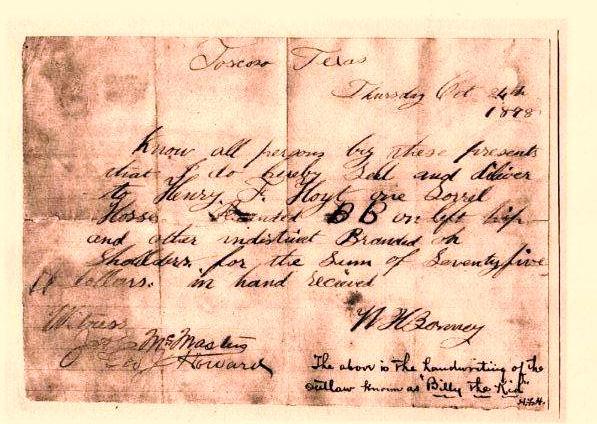 Prior to leaving Tascosa, Billy made a gift to Doctor Henry Hoyt of his best horse “Dandy Dick”, an Arabian sorrel branded BB on the left hip.  Billy wrote a bill of sale to Hoyt, but Hoyt found out years later that the horse had been stolen from New Mexico Sheriff William Brady the day he was killed in Lincoln, New Mexico on April 1, 1878.