During the early 1880’s the large cow outfits and the small ranchers were in a constant struggle over the use of the open range.  Pat Garrett was hired by the large ranches and made a Captain of the newly formed panhandle Texas Rangers, to protect them from rustling and mavericking by smaller ranches.  This caused an intense split between certain groups in the Tascosa area.   On one side were the cowboys and small outfits (The System), including Tom Harris, Lem (or Len) Woodruff, Louis “The Animal” Bousman, “Poker” Tom Emory, “Squirrel Eye” Charlie Emory, Boss Neff, John Gough, a.k.a. “The Catfish Kid”, Theodore Briggs, Jesse Jenkins, and Jim Gober (who would become the first sheriff of Potter County), and on the other side were the foremen and cowboys supporting the large outfits, including Ed King, Frank Valley, Fred Chilton, John Lang, Kid Dobbs, Jack Dixon, and George Jones.

On the evening of March 20, 1886, former Texas Rangers, Ed King, Frank Valley, Fred Chilton, and John Lang rode in from Jerry Springs (a bog camp a few miles west) through Tascosa on their way to a baile (dance) at Casimero Romero’s home east of town (the Romero house sat where Veigel Home sits now at Boys Ranch).

Sometime after midnight, the men rode back to Tascosa, where Ed King met dance hall girl, Sally Emory.  Valley and Chilton went into the Equity Bar (just across the street and a little east of today’s Boys Ranch Headquarters), while Lang tied up their horses in front of the Exchange Hotel. 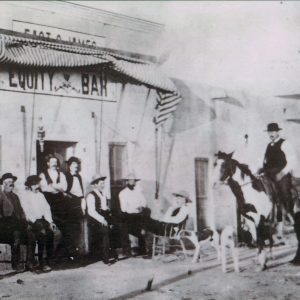 Ed King and Sally Emory met outside the Dunn and Jenkins Saloon at the corner of Main and Spring Streets (on the curb in front of the current Boys Ranch Headquarters ).  A voice from the dark porch called out to King.  As he stepped up to address the person, he was shot in the face and fell face up on the street.  Lem (or Len) Woodruff stepped up to King and stuck a Winchester rifle to his neck and pulled the trigger.  Lang, observing the murder from across the street, ran to the Equity Bar yelling “boys, they’ve killed Ed!

Chiton and Valley grabbed their guns and ran to the back of the Dunn and Jenkins Saloon where Woodruff, Bousman, Tom Emory, Charlie Emory and the Catfish Kid were figuring out their next move.  Valley fired two shots at Woodruff, hitting him in the belly and groin, and one shot at Charlie Emory hitting him in the leg.  Woodruff fell into the back of the saloon and kicked the door shut.  Valley kicked the door open and caught a bullet under his left eye from Woodruff’s Winchester.  Chilton was firing from the shadow of the saloon at anyone moving.  Restaurant owner, Jesse Sheets, who had opened his back door to see what all of the commotions was, caught a bullet in the forehead.  A few seconds later, a shot from behind a woodpile hit Chilton in the chest.  John Lang, being the sole survivor of the LS foursome, fled north on Spring Street as bullets hit the ground all around him.

Seriously wounded, Lem Woodruff stumbled into the darkness, heading west towards Theo Briggs home on Cheyenne Creek.  Sheriff Jim East and Deputy Charlie Pierce, awakened by the gunfire, ran to the back of the Dunn and Jenkins Saloon.  As they rounded the corner, the Catfish Kid ran south towards the Canadian River.  Pierce called for him to halt, but the Kid ignored the order.  Pierce fired and the Kid fell, gasping and groaning.  Thinking the Kid was dying, Pierce went back to help Sheriff East.  Un-hit, and unhurt, the Kid ran off into the night.

Fifty cowboys from the LS Ranch rode into town the next day with the intention of killing all of “The System” cowboys and to burn down their houses and the Dunn and Jenkins Saloon.  If not for the calm LS Ranch boss, J.E. McAllister, this could have been the beginning of a war to rival the Lincoln County Wars.

Four men died and two were wounded that morning.  King, Valley, Chilton and Sheets were buried at the Boot Hill Cemetery the next day.  Jesse Sheets, his wife and 5 children had stopped by Tascosa on their way to Oregon a year earlier.  Sheets’ body was exhumed and moved to a family graveyard in Roswell, New Mexico in 1928.

Woodruff, Bousman, Emory, Catfish, and John Lang were charged with murder, with the trial being held at Clarendon.  Jesse Jenkins hired his brother, Charles, to defend his friends.  Charles had successfully defended notorious killer, John Wesley Hardin.  The trial ended in a hung jury.  The case was transferred to Mobeetie, where the jury acquitted all involved.

The Catfish Kid died in prison in 1890 after killing an unarmed man in another incident in Tascosa.  Charley Emory died in 1897.  Lem Woodruff moved to Hot Springs, Arkansas, where he died in 1902.  Tom Emory died in 1914.  Louis Bousman died in Oklahoma in 1942.

How did Jessie Sheets Actually Die

While previous reports say that Jessie Sheets was killed by a bullet to the head. That might not be accurate…

Paul Timmons, a native of Amarillo and past associate editor of the Amarillo Globe-News, who passed away in 2003,  relayed a story that his father had told him.  His father had known Casimero Romero (founder of old Tascosa) and Casimero told his father that Mickey McCormick, prior to his death in 1912, had told him the true story of Jesse Sheets demise.  According to Mickey;

Prior to the gunfight breaking out, Mickey and Jess Jenkins were playing cards in the back of the Dunn and Jenkins Saloon.  Jesse Sheets had been sleeping in the back of his restaurant next door  because someone had been stealing from him in the middle of the night.  When the gunfight broke out, Jesse woke up and came out to see what was going on.   Jess Jenkins got up from the card table, opened a side door  of the saloon and shot Jesse in the back.  Jesse fell forward into the street and hit his head on something, probably a rock.  After the gunfight was over, the only visible wound on Jesse was where the blood was flowing from his forehead.  So the official cause of death was believed to be a gunshot between the eyes.  For his burial, they wrapped a bandana around Jesse’s head to hide the wound.

Jess Jenkins claimed to be in Seymour, Texas with Tom Harris at the time of the gunfight, but then added “But I always had a few thoroughbreds standing by”.

Then in 1928 when Griggs Funeral Home of Amarillo came out to exhume the body of Sheets, they found the casket in fairly good shape.  Upon opening the casket, they noticed that the bandana was still wrapped around Jesse’s head.  They removed the bandana and found no bullet hole.  Upon further inspection, they did find a bullet laying in the bottom of the casket, about mid chest, which would verify the story Mickey told to Casimero.